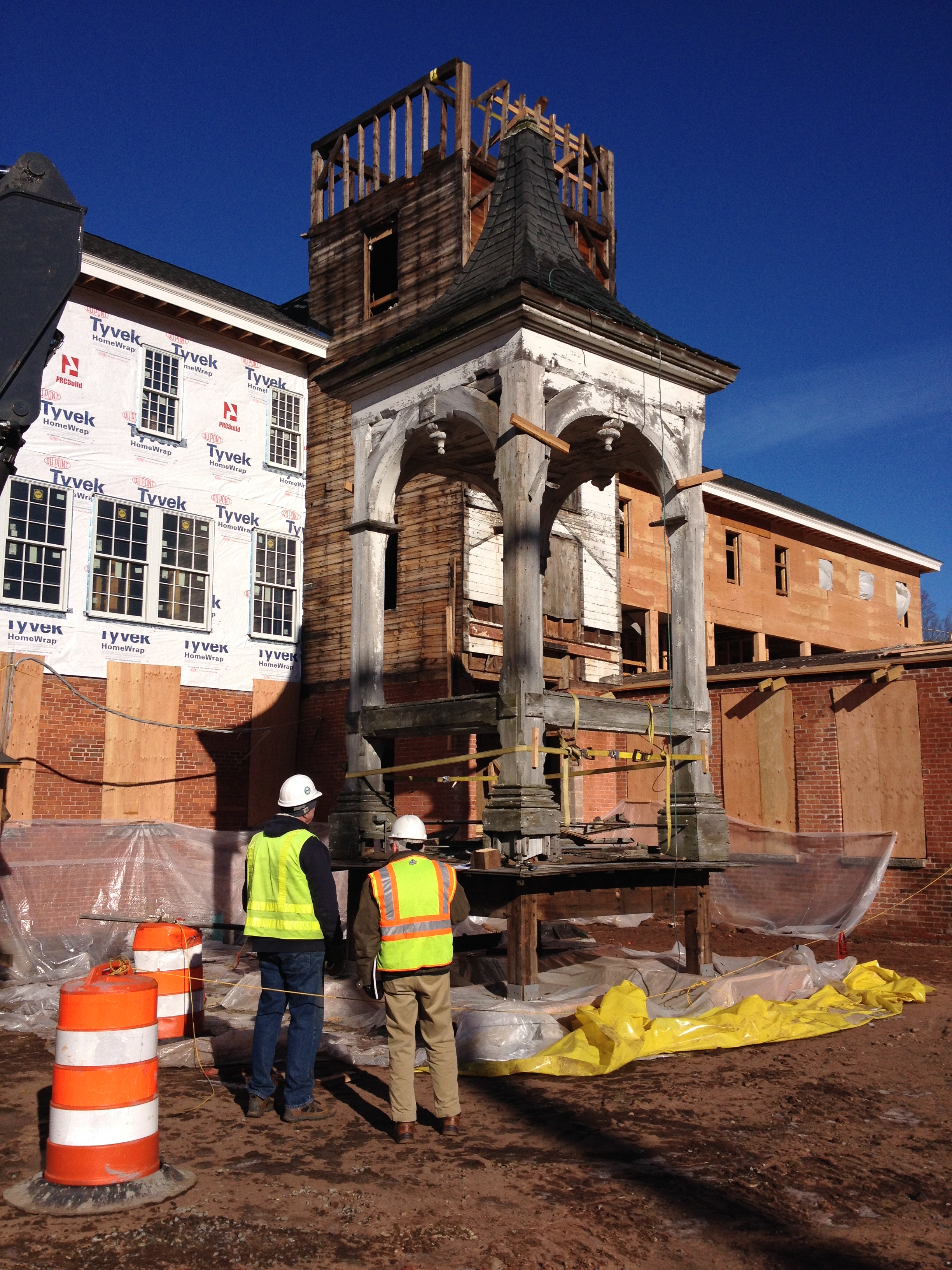 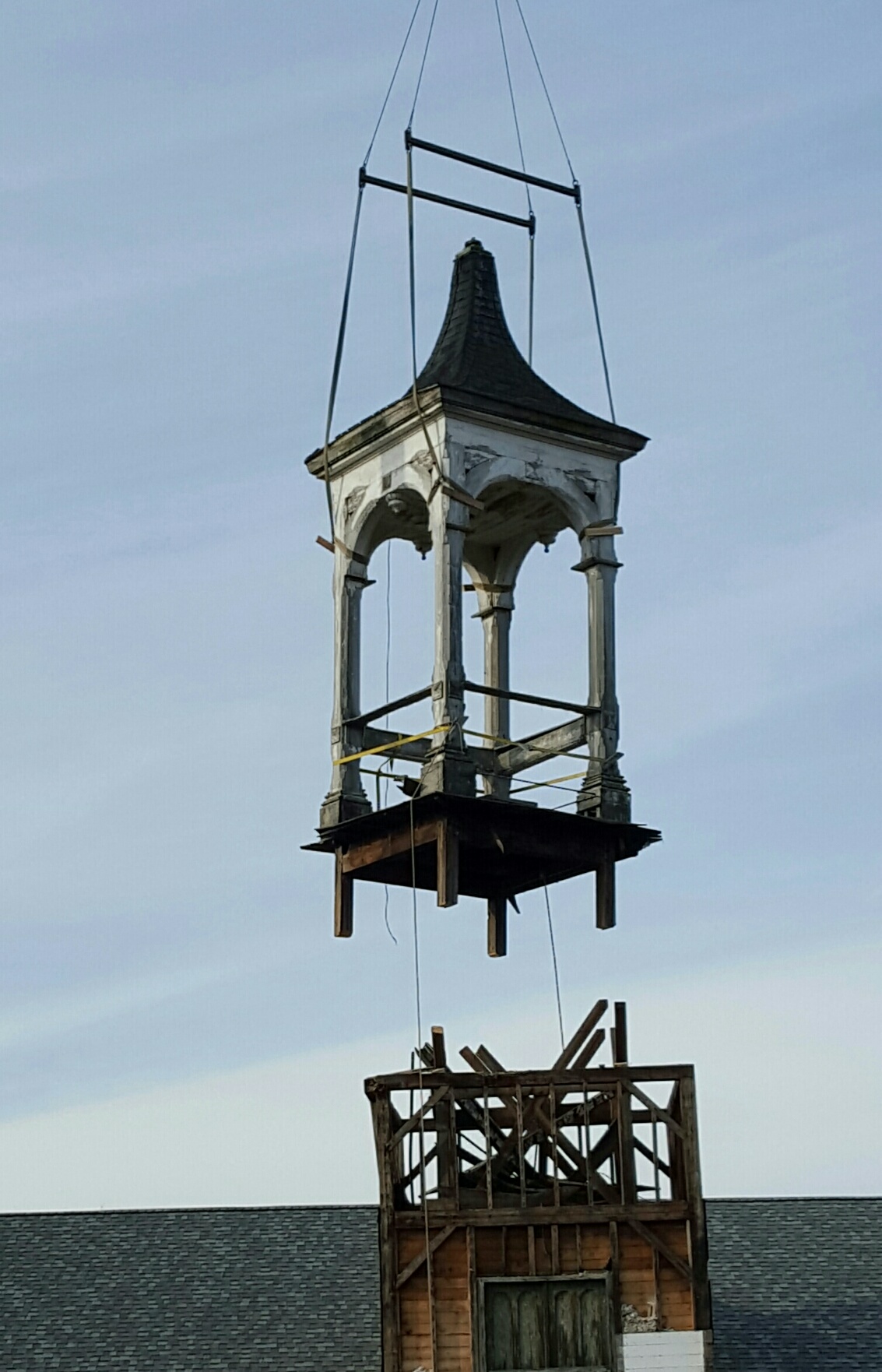 On a mild morning in mid-December, the belfry of the Old Talcott Mill in Vernon, CT was removed from the top of its tower. Its posts cut loose at four corners while held tightly by the crane above, the nearly 150 year old bell chamber was lowered safely to the ground. There it rests, a local icon awaiting restoration, on a blanket of plastic with each post mounted firmly to four freshly cured concrete footings.

The Talcott Brothers’ Mill was constructed in 1870 on the site of the former Kellogg Mill which was destroyed by fire 1869. Many additions and alterations were made to the Talcott Mill over the next century, but it is believed that the bell tower was part of the original construction. For many years the bell served to call workers to the textile mill and signal other important events in Talcotville. Today the image of the open belfry is featured prominently on signs throughout Vernon, CT and the Talcott Mill bell rests in its cradle on the lawn of the Vernon Historical Society.

The belfry had been leaning considerably at the top of the tower for some time, birds were nesting in its upper roof, its finial long since removed. There had been efforts over the years to secure the belfry, as evidenced by structural cables at the upper floor of the tower and steel pipe columns in the walls. Despite these efforts, over the last year of construction there had been fear that the wrong weather might bring the belfry down. Not much was known about the actual condition of the belfry because it was too dangerous to examine and work on from 60 feet in the air. Now with the belfry on the ground, I met with the Contractor and Structural Engineer to review what will be required to restore the belfry.

The contractor peeled back the layers of wood trim to examine the structural timbers. Prodding them with the backside of a hammer we realized the wood posts appeared sound. Much of the trim surrounding the timbers would have to be replicated and repaired, but all the pieces were present to document and template. The bell chamber floor requires considerable reconstruction and the upper and lower roofs will both need to be rebuilt almost entirely. When the asphalt shingles were removed from the upper roof edges, a slate roof was revealed, and below the slate was the original tin roof. This was an exciting discovery as it verified our assumptions. Historic photos were not clear enough to determine what the original roofing was, but based on our historic preservation experience we had specified a flat metal roofing system. 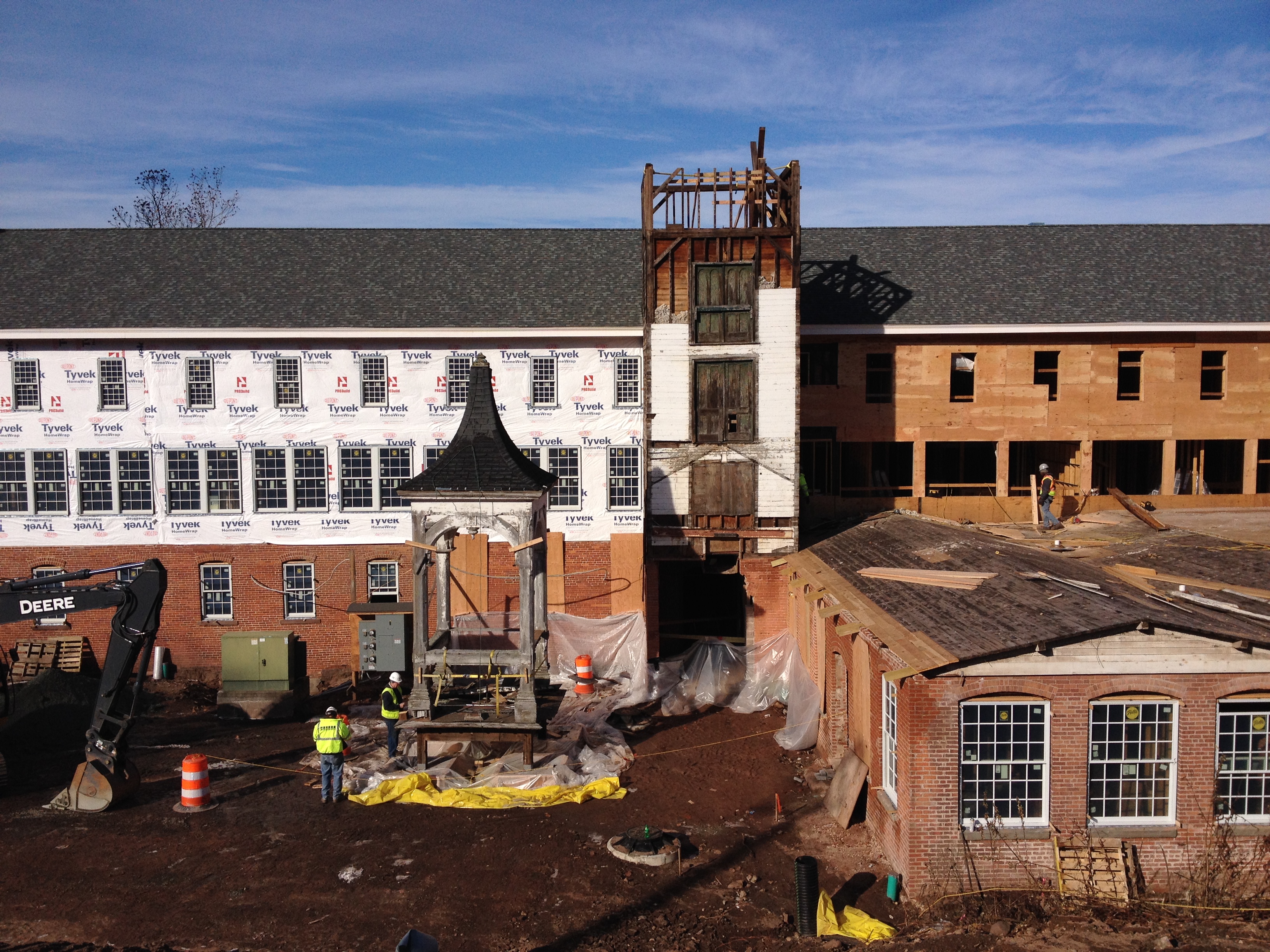 After examining the belfry on the ground, we headed to the upper floor of the tower. The structural engineer had already determined that the four steel pipe columns in the walls of the tower were sound, but the beams they carried at the top of the tower were insufficient to receive and support the belfry’s posts. It was now the engineer’s job to design a system utilizing these existing columns that could support the belfry for the next 150 years. Within a week we received the engineer’s design, carpenters were preparing to create custom knives to duplicate existing mouldings, and the restoration of the center piece of Talcotville was becoming a reality.

The Preservation Story of an Icon: the Talcott Mill Belfry

The Talcott Brothers’ Mill is undergoing a certified rehabilitation, which means that the project is utilizing State and Federal Historic Rehabilitation Tax Credits as one of its funding sources. Rehabilitation is defined by the National Park Service as “the process of returning a property to a state of utility, through repair or alteration, which makes […]

Building Wellness in the Community

Wellness: the quality or state of being healthy in body and mind, especially as the result of deliberate effort The built environment is a physical, (temporarily) permanent representation of our community and ourselves. We live, work, love, and play in buildings and the space between them, and the organization and character of those buildings reflect […]

An architect’s purpose is to shape the world in which they live; each structure designed is a monument to the time, place, and culture in which it was built. During his first visit to Montgomery Mill in Windsor Locks, CT, Max Ballardo of Crosskey Architects observed that time inscribes decay, nature regains its natural habitat […]