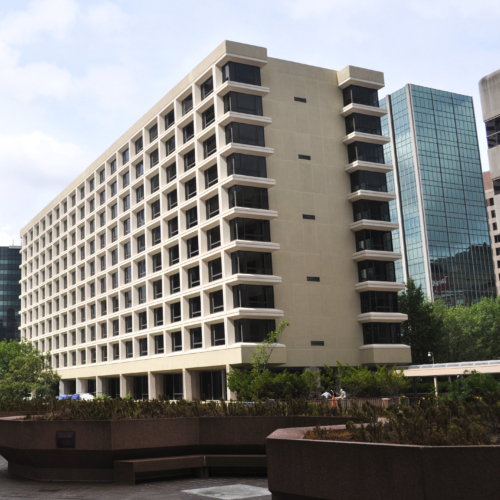 Hartford embraced ideals of urban redevelopment and responded to the Connecticut Redevelopment Act of 1945 and the Federal Housing Act of 1949, and created the Hartford Redevelopment Agency in 1950. These acts incentivized the clearance of entire inner-city slum neighborhoods in many historic cities across the country to make way for urban renewal projects. Hartford identified areas for redevelopment and targeted Hartford’s East Side neighborhood, Constitution Plaza. Designed by noted modern architects Curtis and Davis, Hotel America was completed in 1964. A major component to the Constitution Plaza complex, it’s the first urban renewal project in Connecticut. In 2012, Hotel America was one of the first, if not the first, modern building to be listed in the State Register of Historic Places.

In January of 2011, the vacant building was purchased by 5CP, LLC, a consortium with Girona Ventures, LLC and Wonder Works Construction and Development Corporation, as primary managing partners. Crosskey Architects collaborated with the developers to convert the hotel, now referred to as Spectra Boutique Apartments, into a multi-housing project consisting of 190 units with a mix of 54 studios, 123 one-bedroom, and 13 two-bedroom units. The developers selected the building because of its prime location in downtown. The Front Street District, Connecticut Science Center, Convention Center, restaurants and entertainment venues are all within walking distance. Large windows made the building more attractive for redevelopment, allowing abundant natural light to flood living spaces and affording breath-taking views of the city and the Connecticut River. Inspired by 1960s colors and finishes, the interior designer created warm and inviting spaces respectful of the Modern-era. During construction, massive steel trusses were uncovered and celebrated as a design feature.

The layout of the second floor was the most challenging aspect of the design because of the lack of windows and the two, 103-ton steel trusses that support the structure over Kinsley Street; the largest steel members ever erected for a building in Connecticut. The space was used for resident amenities not requiring natural ventilation (i.e. theater room, library, community/billiard room, fitness center and exercise room. Live/work units with adjacent office space were introduced to the second floor to efficiently use dead space.

Hotel America was part of Hartford’s first urban renewal initiative to revitalize the downtown, which resulted in part the loss of Hartford’s architectural heritage. Ironically, the loss of historic fabric and a vacant lot yielded one of Hartford’s most important modern buildings. Hotel America is a testament that modern architecture is an important marker in our architectural history worthy of preservation. Perhaps the greatest parody is the building, based on architectural significance, was listed to the NR at 48 years-old, two years short of meeting the fifty-year threshold. Hotel America is an important achievement in Hartford’s architectural and planning history, representing a shift in preservation thinking about the significance of the Brutalist style. Two very different planning philosophies prevailed to create a great icon. An urban renewal pioneer in the 1960s, the building is once again part of Hartford’s revitalization.